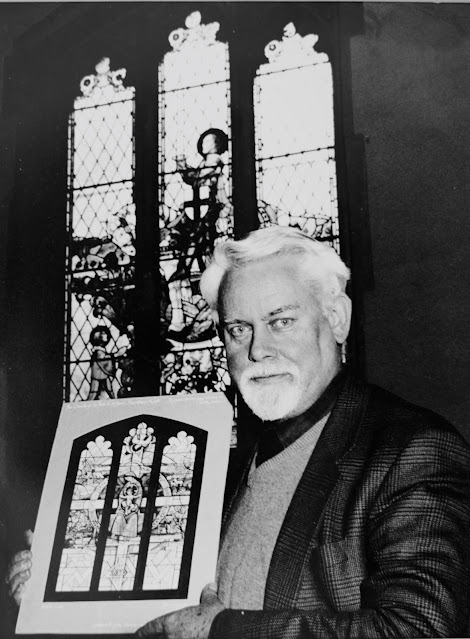 Black and white was ideal to photograph stained glass artist the late John Lawson in 1999.
Removing colour stops hues distracting the eye from the design.
The forecast was for sun. It has illuminated the window in the background which was designed by John's father William to mark the end of World War II.
Mr Lawson is holding his design for a Millennium window at the same church, Shoreham, in Kent.
A Vivitar 283 flash is mounted on the camera and another 283, fired by flash sensitive, peanut slave, is sitting in the crook of John's arm behind his design.
Not having digital I was unable to check that the exposure had worked.
It was shot on Ilford HP5 black and white film and processed and printed at Sevenoaks Chronicle darkroom.
It was digitised by photographing the print with a 50mm lens.
It is a shame I did not have access to the internet in 1999.
When Mr Lawson passed away in 2009, after losing his battle with cancer, there were a number of obituaries in the national press.
He was one of the leading stained-glass artists of his generation.
He designed glorious windows not only in Westminster Abbey and many other British cathedrals and churches, but also in mosques, palaces and hotels as far afield as Dubai, Oman and Brunei.
For the last three decades of the 20th century he was chief artist for the internationally renowned Goddard and Gibbs Studios.
He was much in demand by some of the world's wealthiest rulers and princes.
In the Ramada hotel in Dubai, in 1980 he finished, an awe inspiring stained glass mural, which, at 41 metres high and nine metres wide, was listed in the Guinness Book of Records as the tallest stained-glass structure in the world.
His work can be seen in hundreds of churches around Britain, and includes a hanging glass panel depicting Christ the judge in Ripon Cathedral, North Yorkshire, and the windows of the Oratory in Elmore Abbey, the Benedictine monastery in Newbury, Berkshire.
Posted by Mark at 6:14 pm No comments:

The FT recommends: McDonald's for a birthday tea 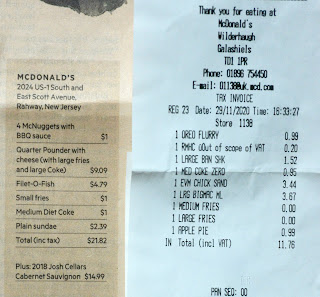 If it's good enough for 'Lunch with the FT' it must be good enough for a birthday tea.
The Weekend FT featured McDonald's chief executive, Chris Kempczinski, being interviewed by Andrew Edgcliffe-Johnson for Life and Arts 'Lunch with the FT.'
We had already decided to take life in our hands and do my birthday at McDonald's Galashiels and the FT copied us.
In his story, Mr Edgcliffe-Johnson wrote: "I have been handed one of the least appetising assignments in 'Lunch with the FT' history.
"If you judged such things by the 65 million customers his 39,000 outlets feed in a day you could call Kempczinski the world's most successful restauranteur. But few gastronomes rhapsodise about his prix fixe and we will have no wine list to savour." 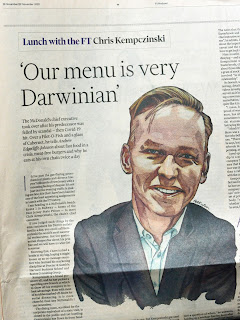 He adds a line from the 2014 film Kingsman in which Samuel L Jackson tells Colin Firth: "A McDonald's cheeseburger goes well with a '45 Lafitte." The cheapest bottle of that vintage Mr Edgclifffe-Johnson could find is $2,999!
Our meal was good and the French Fries are great, as always, which is exactly what Mr Kempczinski says but he eats there twice a day!
Plus due to the uninvited Covid guest we had the advantage of table service.
Posted by Mark at 6:58 pm 1 comment:

Maradona heads to the 'park in the sky'

Football's Marco Pantani, Diego Maradona, headed away on his final journey yesterday.
His passing led Campbeltown Pupils' footballer and former Courier reporter John McCallum to pen the following words:
Maradona was only 60 years old but lived to excess for a long time. However he never really wronged anyone, universally popular and with every teammate and club president he ever had.
Maradona took the "dirty Southerners" of Napoli, embracing the north-south cultural and economic divide of Italy, to domestic and European success in the 80s, when they hadn't done anything for decades against the powerhouses of Turin and Milan.
Maradona was a real legend of the game there's no doubt and perhaps the greatest player ever.
My dad, Peter McCallum was there at, and still has the programme from, Maradona's only appearance in Scotland as a player, in autumn 1979 at Hampden Park.
Maradona mesmerised the Tartan Army as an unknown teenager.
Maradona seemed to like Scotland.
England was another story but that's sporting AND political/emotional.
Peter Shilton, still bitter about the hand of god moment, never came across well amidst the eulogies of yesterday.
Posted by Mark at 12:48 pm No comments:

A great view immortalised in watercolour